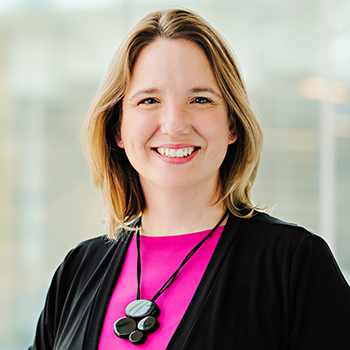 WATERLOO – A virologist at Wilfrid Laurier University has made a world-first discovery with the potential to change the way we treat a wide variety of ailments, from cancer to lower back pain to viruses, including coronaviruses such as SARS-CoV-2.

In a recent paper published in the journal Frontiers in Immunology, Associate Professor of Health Sciences and Biology Stephanie DeWitte-Orr reports the first evidence that a nucleic acid produced by viruses – long double-stranded ribonucleic acid (dsRNA) – can be used to target and shut down the spread of illness in healthy and cancerous cells. Previously, this strategy was only known to be effective for invertebrates – animals without backbones – and plants.

“This means that we not only have a completely new way of treating viruses, but also that we can target any human protein and stop it from being made using long dsRNA,” said DeWitte-Orr. “This is a new strategy for both antiviral and gene therapeutics, and it is superior to similar RNA strategies that have been developed to date.”

dsRNA is a molecule produced by viruses but not by healthy cells. Healthy cells produce single-stranded RNA. A healthy cell uses dsRNA as a red flag to detect when it has been infected by a virus and trigger its immune response.

Plants and invertebrates respond differently to dsRNA than humans and other mammals. Because dsRNA has the sequence of the virus within it, plants and invertebrates take the long dsRNA, cut it up into little pieces and match them with their own single-stranded RNA. This process, called RNA interference (RNAi), stops viruses from producing the proteins they need to survive.

DeWitte-Orr has been studying long dsRNA since her days as a PhD candidate and she has always wondered why humans have the same RNAi pathways as plants and invertebrates, yet do not respond to viruses in the same way. After years of research, she finally found the answer.

“It turns out that by using dsRNA to shut down protein production, RNAi actually does have a significant antiviral effect in human cells. The problem is that we have been looking at this the wrong way,” said DeWitte-Orr. “When scientists previously used dsRNA to target cells, they put a lot of dsRNA into the mammal. But that’s not actually what happens in an infection. dsRNA ‘knows’ it’s a red flag to healthy cells, so it’s not going to make a lot of itself.

“If there is a lot of dsRNA, that means there is a lot of virus and that a body would need to mount a big immune response to shut it down. That’s likely why this strategy hasn’t been successful in the past. What we discovered is that when we use just a little bit of dsRNA, which more closely mimics a real-life virus, we think the body can actually control the virus through RNAi.”

“Short dsRNA is being used to shut down specific proteins within a cell, but those little micro-RNAs can’t get into the cell easily. Humans already have a natural mechanism for taking up long dsRNA, so we won’t need to use a special delivery mechanism like we do with existing therapeutics.”

Another benefit is that scientists can place multiple genetic sequences on one dsRNA molecule. Sequences are used to target specific cells within the body, such as inflammatory proteins to treat an autoimmune disease or oncogenes for cancer.

“You can choose whatever protein you want to stop the cell from making and put all of its gene sequence in one dsRNA molecule,” said DeWitte-Orr. “It could be easily administered to a patient through an injection or inhalant, and because it requires such a low dose, we anticipate very few side effects.”

DeWitte-Orr is working with industry partners to move her discovery from the laboratory to the health-care system. Her research to date has focused on the antiviral effects of long dsRNA via dsRNAi, but there are many applications to explore. Within the next year, DeWitte-Orr plans to begin pre-clinical trials exploring its potential to treat cancerous tumours, as well as lower back pain alongside Laurier Associate Professor Diane Gregory.

“It’s still really early in the development process, but it’s exciting to feel like one of my crazy ideas was actually right,” said DeWitte-Orr, who was recently named Laurier’s University Research Professor for 2022-23. “Sometimes the lab can feel so disconnected from real life, but this has the potential to actually make a difference. We have discovered something that could have a really positive impact on people’s lives and that motivates me to see how far we can go.”