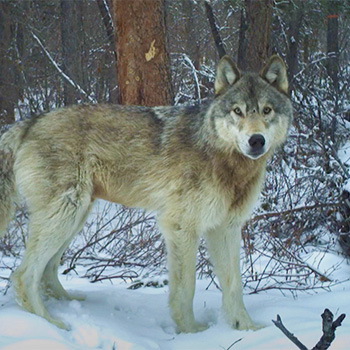 In a landscape as expansive and remote as the Northwest Territories, capturing a clear understanding of the local wildlife is an onerous task. Governments throughout the territory have struggled to make data-driven decisions as they strive to protect biodiversity.

Through the power of technology and collaboration, that is about to change. A network of academics and federal, territorial and Indigenous government partners have teamed up with Wilfrid Laurier University researchers to document the occurrence of NWT wildlife across an unprecedentedly large area of the territory.

Partners in the Northwest Territories Biodiversity Monitoring Program installed more than 1,000 inconspicuous, armoured cameras and audio recorders in and around protected areas throughout the territory to record the sounds and images of nature. Activated by sensors whenever animals walked by, the cameras collected millions of images of moose, bears and other species throughout the course of a year.

Eric Jolin, a Laurier M.Sc. student, is in the process of reviewing the images and he is impressed by what he has seen.

“I’ve been amazed by the sheer amount of animals that we’ve documented, especially species that don’t often get captured by cameras like wolverines and lynx,” he says. “Even at big, wide-open tundra sites, we saw whole herds of caribou and muskox walking by throughout the winter. We had predators like wolves and grizzlies coming up and investigating the cameras. Some are using them as scratching posts.”

“It’s a huge stretch of intact wilderness, which is something of a rarity in North America,” says Jolin. “It’s such a remote area and we know almost nothing about it in terms of species distribution and occurrence. We need that basic baseline data if we’re going to monitor and track how things change, especially in the North where climate change is moving a lot faster than it is in other places.”

Eric Jolin and Claudia Haas holding a camera and audio recorder used in the wilderness.

In the coming months, Jolin will be sifting through vast amounts of images and audio files to delete the “false positives” – when sensors were activated by the wind or a tree branch – and upload the content to an online tagging platform for categorization. The resulting data will be used to estimate population density, age, sex and other demographic information, and to assess the health and geographic range of many wildlife species.

With so many stakeholders involved in the research program, such as the Canadian Wildlife Service, Parks Canada and local Indigenous communities, there are a wide variety of interests in the data, from managing bat and amphibian populations to tracking migratory birds.

“Our data will be useful for mapping species distributions, particularly of two culturally and economically important species: caribou and muskox,” says Jolin. “Caribou have undergone this massive decline in population and the area they roam has contracted, while muskox have had a massive range expansion. Historically, they live in open tundra environments. Now they’re found in forests south of the treeline.”

"Indigenous culture is so intrinsically linked with the health of the land that all of these decisions contribute to them being able to maintain their way of life and well-being.” - Claudia Haas

Another Laurier student in Stewart’s lab, Claudia Haas, is uniquely equipped to manage diverse research interests throughout the NWT. She is currently on leave from her position at the Government of the Northwest Territories, where she has worked as a protected areas biologist for the past 15 years.

“Because I will be wearing two hats, as a government biologist and a PhD student, I’m in a pretty good place to help make sure that these studies are what is needed for northern land managers to make decisions,” says Haas, who is completing her PhD in Biology. “Our most important partners are Indigenous governments. This is their land and we need to support them. Indigenous culture is so intrinsically linked with the health of the land that all of these decisions contribute to them being able to maintain their way of life and well-being.”

Haas says that Indigenous communities are involved at every step of the research process, from determining sampling locations to processing data, and some have taken over data collection entirely. Much of the collaboration happens through Indigenous Guardian programs, meant to foster environmental stewardship.

With her years of experience in environmental management, Haas sees this novel approach to species monitoring as a massive step forward.

“We used to have to take people with specialized skills into the wilderness who could identify hundreds of birds just by listening to them,” she says. “Now you can place these units and record many months’ worth of sounds and then scientists can sit and listen as long as they need to. It’s way more efficient and we can gather way more information. We’ve never before had this kind of glimpse into the lives of these animals.”

Both Haas and Jolin are grateful to be studying at Laurier where the university’s partnership with the Government of the Northwest Territories and wide network of relationships throughout the territory help to make this research possible.

“It’s pretty incredible for a smaller university to have a partnership with an entire territorial government, and it was definitely a good incentive to come here to do my postgrad studies,” says Jolin. “Being able to be up there over the summer and learn from the Indigenous peoples who live and rely on that landscape, it was very humbling for me. I learned an incredible amount.”